0 Items
Our club history on its 50th anniversary.

The first organisational meeting was held in the office of Rockdale solicitor, the late Mr Fred Bryant whose son John still conducts the legal firm of Bryant and Co at Rockdale. This meeting would have been held some time prior to the 15th May 1956. Mr Fred Bryant was an active member of Rockdale Rotary who had decided the area needed a youth centre and Mr Fred Bryant took on the project on their behalf. It is believed that he was the 1st President of Rockdale Youth Club and a trophy bearing his name still exists.

On 15/5/1956 fund-raising activities started with a request for pledges or shares that would underwrite the fund-raising activities to get the centre started. These shares were only called up in small amounts if required and were issued in £5 lots. There were 34 shareholders with a capital account potential of £170. The first call was 2/- per share.

Mr Tim McCarthy, the Deputy Mayor of Rockdale, worked closely with Mr Fred Bryant in getting the Council supporting the establishment of the youth centre. Eventually McCarthy Reserve, where our home ground is located, was named after him and apparently he became quite emotional when he was surprised with this honour.

Mr Bryant assembled a number of interested residents at his office to get the project moving. They included Mr Ken Clark, Mr Sid Tanner, Mr Doug Hillier, Stan Bryant, Reg Whiteoak and Mr Joe Palmer. The Mayor of Rockdale Mr H Jones became a patron of the Club at the time of its inception.

Service clubs got behind the project with the major contribution coming from the Rockdale Rotary Club of £400. The Apia Club £250 and the Mayoress’s fund £250 were very helpful as was the Bowling Club £142. The Lion’s Club also contributed substantially from 1965 onwards raising £631 in a raffle and later £2,909 from functions demonstrating yet again the amazing power of Lion’s to raise money. Fund-raising activities included jazz concerts, bonfire nights, lucky numbers, a ball, fetes, theatre nights and bowls days. It seems that no-one had any excuse not to be socialising. In later years, the Rockdale RSL Club would become a major sponsor and supporter of the Club.

Mr Ken Clark claims responsibility for coaching the first team organised by Rockdale Youth (believed to be in 1958 ) being an U10s team which included his son Kenny. Ken and Mary Clark were both involved with the Club for around 4 years. Mary was involved in the Women’s Auxiliary and netball, then called basketball. Ken states that his U10s team won the premiership playing in a 10-team comp. He also states that Rockdale Youth was the only soccer club to have its own ground as the others were using Scarborough Park as their home ground.

It appears this group at least commenced the building of the brick amenities block which are still in use as the dressing rooms and toilets. After this initial enthusiastic start, the soccer club struggled and Ken Clark was forced to give up his involvement whilst studying part-time for an electrical engineering degree.

It appears the club was then unable to field teams for a couple of years.

Around 1961-62 Mr Jim Graham, who has been described as a talented organiser, great coach and great soccer player in his own right, brought his sons, Mal & Jim and became President. Stuart Logan, who still lives in Rockdale, along with Ken Stokes, Mal Patterson, John Barnes, Prof Bill Cummings and the King family joined with Jim’s to form the new committee which restarted the club. This group effectively built the playing field on which we play today. Mal Patterson was particularly tireless in his efforts to keep the field maintained. A number of other enthusiasts came along at the same time including Don Marshall* whose son Phillip and grandson Alan, play for the Club. Jim, Don and Phillip are all life members. Other who added greatly to the club during this time included Mal Green, Bob Burke, Sid & Mal Tanner, Sid Bushby, Mrs Noelene Boittier, Jim Gooch, Keith Moore, Tom Smith, Roy Tatum, Bill Marshman & Lou Vecchi. There are many others that must be added to this list who undoubtedly come forward so is by no means a completed history and names that are not mentioned will be added to this list.

When Don passed away in 2002 his ashes were buried on our home ground in three locations underneath the two penalty markers and the kickoff market following a memorial service attended by almost all of the club including the juniors who wore their uniforms. Many parents were proud but somewhat shocked to see their children line up to help sprinkle dirt on Don’s ashes. It was one of the most moving moments in our Club history.

Stuart Logan remembers the first 2 teams were the 7’s & 8’s which included his son Peter. Initially they had just 1 set of playing shirts so Stuart’s wife Rita organised for the mothers to make another set.

Rita was the 1st President of the Ladies committee and worked hard in the Canteen which , at that time, was a large tent. During this period there was discussions and some “political” pressure to merge with the newly arrived St George Police Boys Club. However the strong visionary men of the time resisted these moves and we thank them for it. 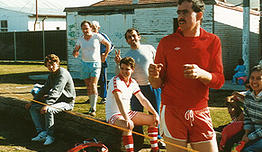 Following Jim Graham’s death in 1976, in recognition of his outstanding achievements, the field was renamed the J Graham Field with memorial stone placed inside the front gate.

The Club grew in strength through the 60s. In 1964-65 the Soccer club had 18 teams and the basketball( netball) had 19 teams. The land on which the Club is located stretched from Bay Street through to Ador Avenue prior to the erection of the Police Boys Club. Other activities of the Youth Centre included dancing, rugby league, rugby union, marching girls, athletics and cricket. It appears that if there was an enthusiastic organiser, there was an activity for youth.

In the early days of the Club, Presentation Nights were held at Rockdale Town Hall. Many remember Jim Graham bringing a big cake for his team table and lots of other goodies adorned the tables of the teams. This tradition was temporarily revived in the 2000’s.

The 60’s also saw a number of club legends begin their careers including Ian Baddock, Phil Marshall, Graeme Morris, Keith Tasker, Peter Rumford, Malcolm Graham, Tony Antoniou & sorry if I have forgotten some . Many of these people are still involved with the club.

The next building was a wooden shed on the southern side of Dressing rooms which was used as the canteen until the new building on the northern side was erected in 1975/76. The old shed then became a gear room until it was replaced in 1990 by the concrete building we see today. This was built by the club’s current President Stephen Brimicombe.

The 70’s was a boom time for the club with a strong committee and active Ladies group. Social activities, family days, prawn & games nights were a highlights. Don Marshall was a key figure along with people like Des & Irene Doyle, Steve Kaye, Tony Mann, the Morris family, Barry Inger, Shirley Brown and great social organiser, Frank Scattergood. Again apologises to those missing – we will catch up with you before the history is complete !

The 1st All Age team was admitted in 1975 and while controversial at the time , has proved a key part of the ongoing success of the club. It was not until 1979 that AA football was eventually allowed on the Jim Graham Reserve after a quite dramatic meeting of the co-Op body held at the Brighton Fisherman’s club.

1979 saw the club win the inaugural St George Association AA Premier League title defeating Sans Souci who had been legends in the area having held the title for 12 years.

1981 saw the 8A’s became the club’s first Champion of champions winners (neither of the above feats have yet been repeated).

The 80’s were a mixed period with Ian Baddock, Ron Ogilvie & Mike Tessyman sharing the Presidency while Nancy Hunt was Treasurer for much of this time. The sad loss of much loved coach Sam Saveski saw a fund raising coaching clinic conducted by Australian Coach Frank Arok, Captain John Kosmina and Sutherland coach Bill Rigby at J Graham Reserve. The 80’s also saw Barry Inger return to the club and the introduction of Bushy Pillay.

This period also saw the All age teams begin to contribute fully to the club with people like Larry Sharpe, David Wilkes, Mark Michel beginning to make their mark on the club.

The 1980’s also saw the true spirit of the club come to the fore with the playing of the Harold Darrell Memorial Shield played among the club’s legends and current stars. This tradition continues today with the Wilkes / Marshall shield which commemorates 2 of the club’s great legend recently having it’s 8th anniversary!

The early 1990’s saw a rise in team numbers under new President Allen Rose and in 1990 Rockdale won the Association Gala Day March Past while in 1994 the club won the prestigious W Dobson shield for best performing smaller club. 1994 saw the club under threat from a large debt left by a team which contested the State Federation League however the “old guard” rallied around and the club was again saved.

During this period Ian Baddock was instrumental in modernising the club. On the 17/11/94 it was agreed to change the name & logo to “R_o_c_k_d_a_l_e_ _R_a_i_d_e_r_s_”. Further the playing strip was also revised to include a smart red strips down the side.

Throughout all this period the Marshall family, particularly Don & Phil, were the backbone of the club. However even they tired and in the late 1990 the club was on the verge of a merger (not for the first time !) with the adjoining St George Police Youth Club.

Stephen Milgate sought out the club committee only to be told by Phil Marshall that he was basically looking at the committee but “could he wait a moment while Phil finished putting up the nets !” Stephen took up the challenge, became President, revitalised the club, renovated the building and for most of the 2000’s oversaw a great period in the club’s history.

In recent years people like Tony Asplet, who following the tragic death of some kids in Bowral from falling goal posts, re-engineered, designed and built a unique set of goal posts which are far safer, and current legends Goran Marjanovic, Mark Seed, Yvonne Perry & their partners have carried on the tradition

Many thousands of young people have now passed through the ranks of Rockdale Youth Centre and Rockdale Raiders Soccer Club and their children and grandchildren are now playing for one of the great post war youth projects of the St George area.

A special mention must go to Rockdale RSL who has been the major sponsor of the club for over 20 years. During that time they have helped with annual donations and assistance in a major renovation of the Dressing rooms.

This is a demo store for testing purposes — no orders shall be fulfilled. Dismiss